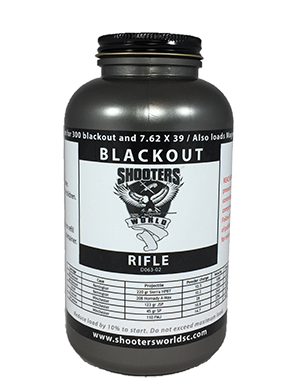 Ballistic results for this propellant show it appropriate for both pistol and rifle cartridges that incorporate a near straight-walled cartridge case. The propellant gas generation rate is appropriate for .300 Blackout, 7.62×39, .30-30, .22 Hornet, as well as many straight-walled large pistol and rifle cartridges where rapid transformation from powder to gas is desired. It is similar in burn speed to Accurate 1680®.

A spherical propellant, it meters through charge plates consistently and will flow well in a high-speed loader. It contains a level of flash suppression, incorporated into the propellant.

This propellant is a canister form of Lovex D063 reloading propellant.

As with any propellant and load combination, a minor change to any of the components of the test load CAN result in significant shift in ballistic performance. This shift can cause unintended high pressures, and result in injury or death. Therefore, Shooters World LLC, nor the manufacturer of this propellant take no responsibility for the intentional or unintentional misuse of this product. The charge weights and results noted within are not recommended, either as a starting nor completed load. They are shown merely as an indication of potential performance in one test load, shot by CIP standards.